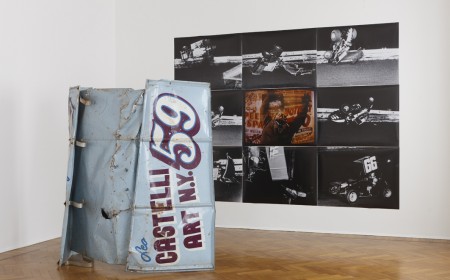 Salvatore Scarpitta: Racing Cars reexamines a seminal figure in postwar American art through his racing-themed artwork. Featuring painting, works on paper, collage, sculpture, installation, video, and the largest collection of the artist’s race cars ever assembled in a museum in the U.S., the exhibition chronicles the remarkable trajectory of Scarpitta from object-maker to performance artist.

Salvatore Scarpitta (1919–2007) worked on the fringes of many art movements—from Abstract Expressionism to Pop Art—while not fitting within any one. Born in Brooklyn to immigrant parents, and raised in Hollywood, Scarpitta came of age as an artist in Italy, where he lived and worked from the 1930s through the 1950s. He captured the attention of storied gallerist Leo Castelli, who encouraged him to return to the U.S. and join his New York gallery in 1959. Although Scarpitta consistently investigated and revisited images of cars, drivers, and races throughout his life and career, he makes his first full-scale facsimile of a race car in 1964, followed by several more replicas of early twentieth-century race cars throughout the 1960s.

The cars are imbued with a personal fascination—he first became obsessed with dirt-track racing when he was a teen in California—as well as with aesthetic and conceptual concerns for dynamism and motion; DIY sensibility and American know-how; an homage to risk-taking and the pioneer spirit; and the merging of life and art. Racing Cars follows the artist from the inoperable replicas of the 1960s to the fleet machines driven on the dirt-track circuit under Castelli’s sponsorship, with Scarpitta as team owner—complete with drivers and crew—in the 1980s and ’90s. With his creations moving from studio to track to gallery, Scarpitta realizes a total art.