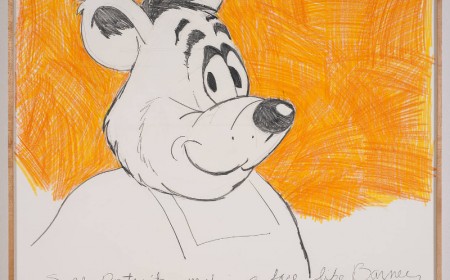 This major retrospective on the work of Conceptual artist Allen Ruppersberg (b. 1944, Cleveland) marks the artist’s first comprehensive US survey in over 30 years. Many of the works included, from private and public collections in Europe and elsewhere, have never before been exhibited in US museums.

Ruppersberg moved to Los Angeles in the mid-1960s with the goal of becoming an illustrator, but soon became active in an emerging scene led by artists such as John Baldessari, Ed Ruscha, William Leavitt, and others exploring the interface of language and image filtered through the lens of mass culture. His early projects—including environments made with found objects; wry, narrative photo works; and a novel copied by hand—began a career-long practice of creating works that prompt both reading and looking, and that intertwine fact with fiction.

Since those early years, Ruppersberg has actively worked between Los Angeles, New York, and Europe. Wide ranging in approach, his work is unified by his regular use of American vernacular culture—including books, posters, newspapers and magazines, records, old films, and other vintage items—which he draws from his vast collections source material. Featuring more than 120 works made over the past 50 years, the exhibition includes the artist’s photo works combining text and image, early assemblage sculptures, and his groundbreaking environments Al’s Cafe (1969) and Al’s Grand Hotel (1971), participatory projects that helped put Los Angeles on the map as a center for Conceptual art. The exhibition also includes a broad range of drawings and collages, and more recent, immersive installations featuring such materials as commercial advertising posters, large-scale photographs, films, and books.

The exhibition charts Ruppersberg’s key themes: movement between places, presence and absence, the book as object and subject, memorials, and self-portraiture. It also reveals his reverence for cultural forms “destined to disappear,” from postcards and wall calendars to hand-painted signs and early recorded music. Perhaps more than any other artist of his generation, Ruppersberg has mined the nuances of culture through its visual details, unsung conventions, and modes of the everyday, often encouraging the involvement of the viewer as social participant, an aspect of his work that has had particular resonance with a younger generation of artists.